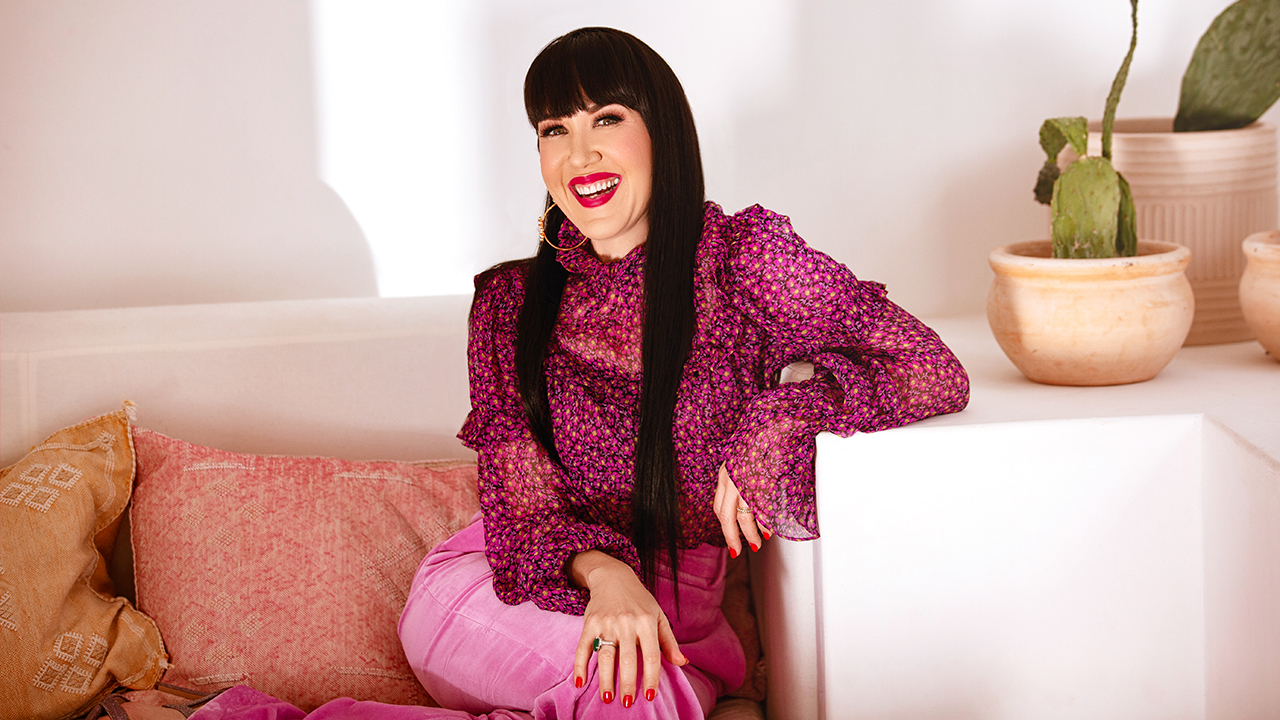 Activate your “I Am Woman” Power

Last Sunday morning I woke up, and Mama Diva Ing decided she needed a day of nourishment, stillness, and me-ness!

You know, the kind of day when you just need to slow down, chill the fudge out, and do sweet nada, diva. 🥂

As a mother with a rambunctious seven year old, mornings in bed are both rare and precious. After decades of running around after everyone else, I’ve finally learned it’s up to me to get my needs met! Hallelujah! 😍 It feels juicy AF I have to tell you.

Within minutes, {actually once I made a deal with the husband to look after our daughter}, I was snuggled in bed with a steaming pot of chai watching the rise and fall biopic of singer Helen Reddy called I am Woman. By the end of the film, I’d run the gamut of emotions from pure femininst rage to sacred inspiration. #Iamwoman 💃 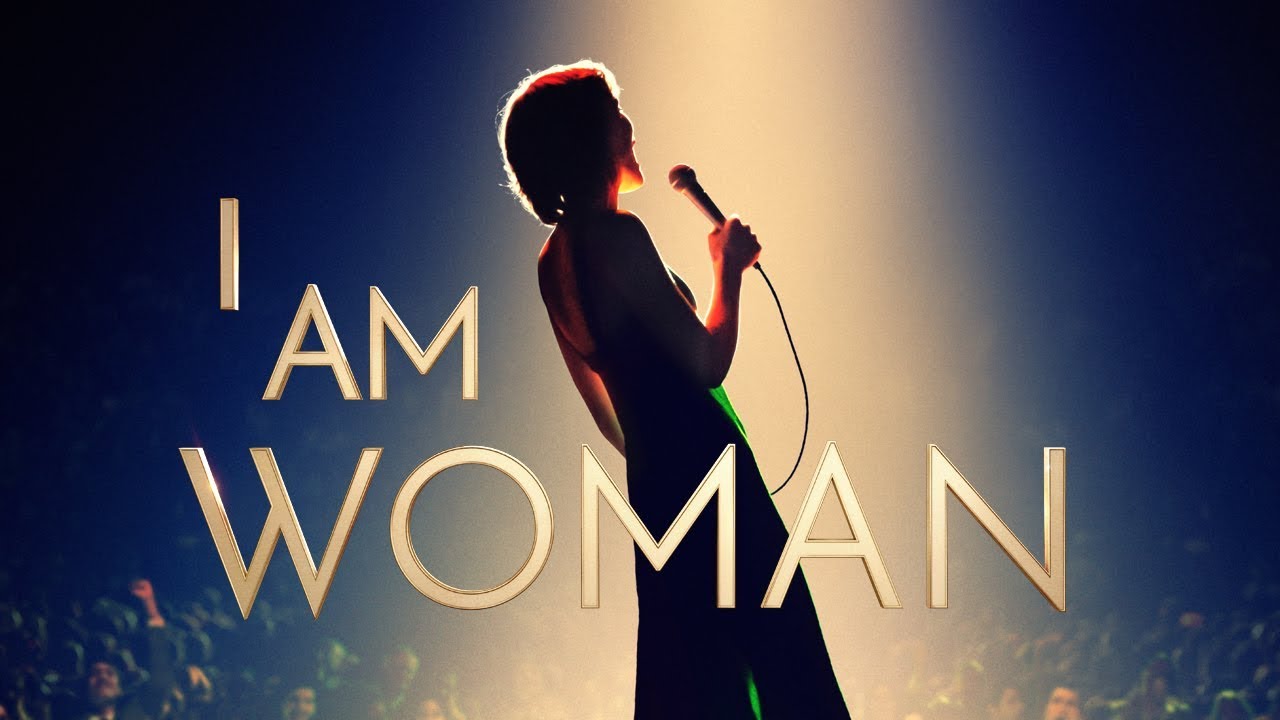 I defy anyone to feel anything less than that after watching Helen’s story.

As a women’s financial empowerment coach and transformational teacher, Helen’s story was a powerful reminder of why I do the work I do. 🙏

At the heart of her story was a divinely talented woman who handed all her power, including her financial security, over to a man. To rub salt into the wound, that man was her husband and manager, someone she should have been able to trust. Their decision that she would focus on being the ‘star’ 🌟 while he managed the money would eventually change the trajectory of her life. She lost it all: control of her finances, her future, and her security.

Helen’s story triggered a deep remembering of my own experiences with trusting a male lawyer with my money. 😖

In some ways, Helen and I have lived parallel lives.

No, I haven’t become one of the biggest recording artists of all time but like Helen I worked my ass off only to hand my financial power over to someone who ended up stealing from me. 😠 About 12 years ago, I started a business in NYC, and my lawyer convinced me to let him hold my corporate kit. 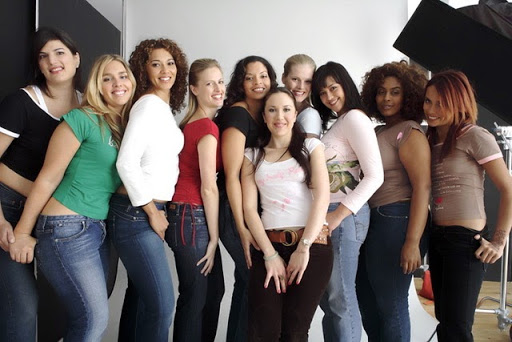 For a limited liability company, your corporate kit is everything, and I trusted him when he told me that it would be safer with him. Everything inside me told me I shouldn’t do it. He then wrote out a whole heck of stock to himself, which we had NOT agreed to. 🙄 Simply put, I lost it all.

Unfortunately, my insecurity around handling my own finances ended in near ruin.

The financial devastation that followed became one of my biggest life lessons. It has changed the way I run my business, and I’m grateful for it. I’ve learned that EVERYTHING has to be in writing, and that you need to know the nuts and bolts 🔩 of your finances. You need to know how you’re spending your money and exactly how much you’re making. I also learnt that when it comes to MONEY you better keep your eye 👀 on it.

You sure as heck can’t hand over that responsibility. Sure, you can get help with your finances {accountants, advisors, mentors}, but DON’T GIVE AWAY CONTROL OF YOUR CASH, DIVA. ❌ 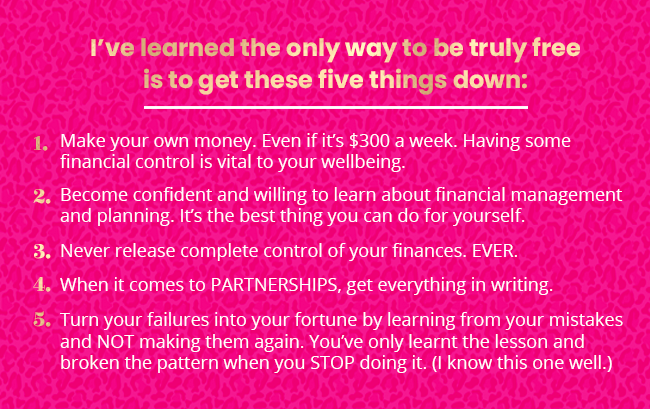 Helen Reddy sold more than 15 million albums and 10 million singles during her career but pretty much lost it all: the cars, the houses, the nanny, and the retirement fund. 💸

I’ve heard the same words from many of my older clients who are often divorced, or recently separated, and have gone from living in mansions to sleeping on their kids’ couches. They come to me at about 55 to 60 years of age and only then start working out their finances.

We have to change this. The earlier you begin and the more financial mastery you have, the better off you’ll be. #true 👍

So this fact is what’s really slammed 💥 me:

Despite the Universal Declaration of Human Rights, adopted in 1948, enshrining “the equal rights of men and women” and addressing both equality and equity issues, women are still facing discrimination on all levels.

Women in general are still the primary caregivers of children, resulting in a greater risk of financial insecurity in the long term.

Violence 👊 against women (emotional and physical) still occurs unabated despite the #metoo movement.

And we risk persecution anytime we speak up. 📣 Take, for example, the author of the first attempt at a declaration of women’s rights in 1791 who was accused, tried and convicted of reason, resulting in her execution. This legacy runs through our veins.

I’ve spent my whole life moving towards this moment where I can no longer stay silent and am compelled to speak out about the absolute necessity of women to gain individual financial sovereignty.

This is a whole new conversation about money 💰 and how to use your talent (yes, you’re oozing in it, darling) to build your worth and wealth—and then maintain power ⚡ over it.

The women’s rights movement, the #metoo movement, and every moment in history that has shifted women towards greater freedom 🦋 have been essential in getting us to this point. But despite our voices 🗣️ being heard a little more through all the noise, despite having ‘equal rights’ in the eyes of the law (in most countries), and despite having the vote, our bodies are still attacked, our persecutors still walk free, and financial security is often out of reach. 😞 The bottom line is that if you don’t have control over your money, you will always be in a position of subjugation.

Helen Reddy did everything she could to succeed. She saved up for years to be able to afford to move from Australia to the US, and then she barely got by before breaking into the business in a big way. But none of that secured her future.

I ask you: What kind of money would it take for you to achieve financial sovereignty? ✨ You don’t have to be a millionaire. Perhaps an extra $50K per year that you could set aside now would be what it would take.

If you’re still not clear about the importance of having your own money, understand this: between 2011 and 2016, the number of older women in Australia living with homelessness increased by 31 per cent. 👎 And it doesn’t just affect older women. Homelessness can be the result of domestic violence, poverty, and divorce for a woman of any age.

This is supported with evidence from the US where women and families represent the fasting grouping group in regards to homelessness. 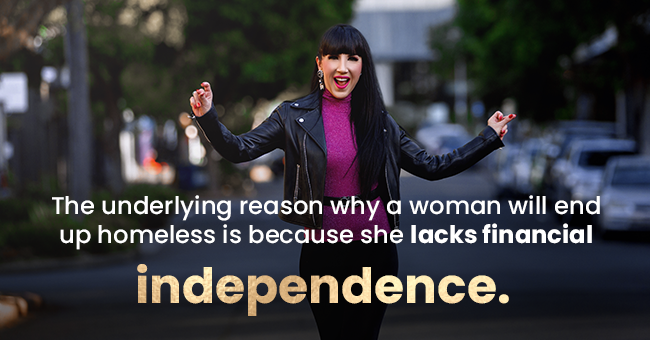 The stats prove that women’s financial security is NOT improving. And these issues are often exacerbated for women with disabilities, women of colour, indigenous women, and women from culturally and linguistically diverse backgrounds.

So why are so many women in this position? 🤔

Because women are often economically worse off than men as they’ve decided to stay home 🏡 and raise their kids or take on part-time work, which is usually paid less.

And I get why they make this decision: being a mother is a full-time job. I know how difficult it is balancing being a mother 👩‍👧‍👦 with a job. But my firm belief is that it is the best thing to do for your long-term financial security. Making your own money and not being beholden to your man is the foundation of your financial freedom. You need to take a long-term view. It’s blunt, but it’s true.

This might mean you have to fight 👊 now, but I 100% guarantee you that it is easier to have that fight now than it is when you’re older and trying to live off a pension (while still having to work just to get by).

I say all this with love. My goal for every woman on the planet is for them and their children to have bright futures and secure and enjoyable retirements. 💖

It reminds me of a quote from Sophie Tucker, an American singer, comedian, actress, and radio personality:

Ain’t that the truth! (Although, I also think you need cash 🤑 the whole way through!) 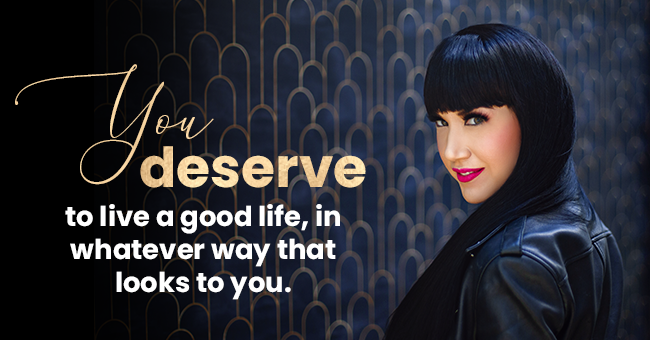 This is your why. To really set your mind to do this means allowing yourself to create and build wealth ✨ for your and your retirement. It’s about giving yourself permission and then taking action based on solid planning. So ask yourself, what do I need now for my retirement? You won’t achieve financial security by keeping your head in the sand.

When I was ripped off by my lawyer and left without much in my bank account, I made a vow to become a master of my money 🙏 and seek expert advice when I needed—without handing over any power.

I encourage you to dedicate yourself to becoming an expert of your own finances. 💎 If you do this, I guarantee you that within a very short time, you’ll be able to turn your financial situation around. And it starts with that one decision. 😉

When I look back at my 20s and 30s, I realize I spent a LOT of time worrying about not having any money, or when I finally did make some, I worried I would lose it. I spent my time worrying and not taking any action by learning and claiming control of my financial power. 😖 Worrying doesn’t change anything, diva. It doesn’t calm you down, and it certainly doesn’t build your wealth. But you can use your fear as a launching pad. 🚀 Knowing you don’t want to live in your mom’s basement or sleep on your kids’ couches can be a powerful mobilizer for you.

Get advice where you have gaps in your knowledge because ‘education makes talented women rich’, as I say to my students all the time. Don’t go down a path of self-criticism for your past ‘failures’ because you’ll just end up on the roller-coaster ride 🎢 of ‘Am I good enough?’ and ‘Can I really do this?’—and doubt won’t get you anywhere.

And don’t work for free. You’re talented. You deserve to be compensated for your work. Set your standards and don’t lower them for anyone—especially your clients because you’re just teaching them to do the same.

It’s time to reclaim the inherent power and wisdom you were born with that’s been stripped from you over the years. 🥂

Helen’s movie is titled ‘I am woman’ based on her most famous song. 🎶 I still can’t get the tune out of my head but when I get to the end of the chorus, I now add an extra line:

Yes, I am wise

But it’s wisdom born of pain

But look how much I gained

If I have to, I can do anything

I am strong (Strong)

I am woman (Invincible)

I MAKE AND MANAGE MY OWN MONEY

I have an invitation for you: if you want to be in a STRONG 💪 financial position, then chat with my team of highly experienced strategists.

Fixated on your divine success,

Ingrid Arna is the founder and CEO of The Ingrid Arna Company and the creator of the Gucci of online business programs, High End Empire. Ingrid Arna and her company are leading the charge in teaching conscious capitalism and building leaders who are devoted to global healing. The return is massive impact and million dollar brands that give back.

Since becoming a mother, the only resolutions Ingrid has stuck to are swapping G-strings for granny panties and quadrupling her fees. She’s never been happier. 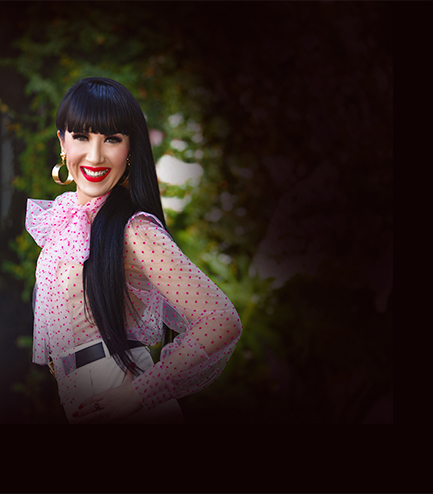 Turn your inherent power into a 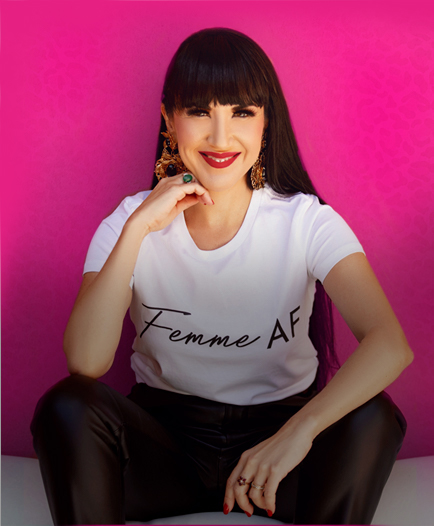 Ready to ramp up your income and impact, with diva grace?

Apply here to talk to my team